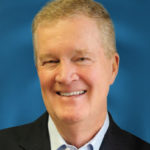 RADM Kenneth D. Slaght, USN (Ret.) is the Co-Chair and President of the San Diego Cyber Center Of Excellence (CCOE), a non-profit established to coordinate and enhance the effectiveness and synergy of the regional cyber initiative, capitalizing on our unique strengths to accelerate the regional economy by creating opportunities for business, attracting and nurturing talent.

Previously RADM Slaght served as the Vice President and General Manager, Navy/Marine Corps Services Sector, General Dynamics Information Technology, responsible for providing IT services to the Navy and Marine Corps. Prior to that he was the Commander of the Space and Naval Warfare Systems Command. He was responsible for providing information technology and space systems for naval and joint services. Additionally, he was the chief engineer for developing, delivering and maintaining effective, capable and integrated command, control, communications, computer and intelligence systems (C4I). He was also responsible for engineering and assessing FORCEnet, the foundation of the Seapower 21 vision

Thank you to RADM Ken Slaght, USN(Ret) for an excellent, informative and engaging presentation and discussion on San Diego’s Cybersecurity Industry for our January meeting. To all who attended, (and there were 48 of us!) a Thank You! as well. We sincerely hope you found the presentation and questions informative and helpful. An extra appreciative Thank You! to USD and the USD Center for Cyber Security Engineering and Technology for providing our chapter an incredible and comfortable meeting location.

Images from the event: 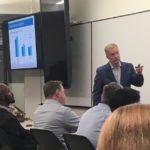 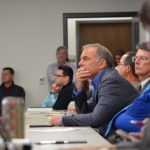 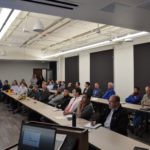 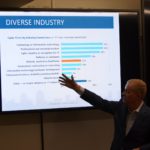 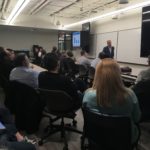 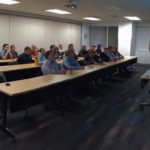 The no-fee meetings and presentations are the second Thursday of every month from 6:00-8:00pm PST at the University of San Diego, BEC
EVERYONE is welcome!
InfoSecurity Professional Magazine 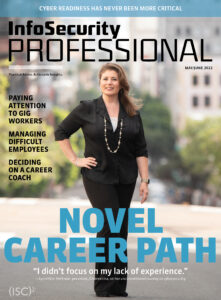